If you look at my apps in the App Store, you’ll find out that they (with the exception of my silly game Ugly Plants) are all related to productivity in some way or another. And they are all pretty basic. They are simple. They don’t have server side. They are journals and to-do lists. There is a reason for why it is that way.

My first app was Simple Q&A Diary. I had the idea for this app long before I started learning iOS development. I didn’t think it was going to be a mobile app at that time, though. I thought maybe someday I’d create a web app. But I wasn’t sure how I would do it as I lacked experience in coding.  Also I’d have to work on registration and sign in features, which was too complicated for someone who wasn’t even a newbie in programming. At that time I only dreamed that someday I’d learn programming. So it wasn’t a real plan.

Then, when I decided to learn iOS development and I needed to create my first app, I had the idea ready. And what was good about realising my idea in the form of a mobile app was that in a mobile app there was no need to register and log in the users. And the mobile device didn’t need to connect to the internet in order for the app to work. So I created this app. It was a huge success compared to my other apps. It makes me more then $100 a year.

Then I created a game called Ugly Plants. It is a total failure. Nobody likes it. And nobody can find it on the App Store, since nobody is looking for ugly plants. I don’t know what keywords to use to make the game more searchable (or should I say findable?). Anyway, I decided to never make games again, and instead only create useful apps.

Learn from your successes

Ok, let’s not go into the history of all my apps. Let me just tell you what I do to make money from my apps. Here are the guiding principles that I use. First of all, I try to learn from my successes. I know there is a ton of advice on how to promote your app. I don’t use most of it. I don’t have time for PR and I found out that social networks are mostly useless. I guess social networks might be useful if you take them seriously enough and dedicate a lot of time to them. But I don’t have time. I have a full time job. And I don’t take my apps that seriously. The real reason for creating apps is not money but honing my developer skills. And I create apps that I use myself, so even if nobody likes them I haven’t wasted my time creating them. More on that later.

How to get an idea for an app? Create apps for yourself

I don’t try to figure out what other people might need. You can do a market research. There is nothing wrong about it. But if you go down that road it is so easy to get mistaken. I personally don’t do it. What I do instead is I create apps for myself. The way I look at it is this. I’m not a unique snowflake. If I need something there must be thousands of people who need the same thing. So, if I create an app for myself, somebody is going to buy it. And that’s what’s happening to my apps. I regularly use all of my apps except that silly game – Ugly Plants. And I see that people are using all of my apps except that silly game that I myself don’t play.

How I price my apps

When I first uploaded my very first app Simple Q&A Diary I made it free. The reason was that I didn’t have my banking account ready for receiving money from the App Store. So the app was free for several months. Then when my banking account was ready I priced the app at $1. It was at that price for quite some time. It was making about $5 a month. Then as an experiment I priced it at $2 for one month. The amount of downloads that month was the same. So by changing the price I doubled my income from this app. I thought maybe it was not the end, so I priced it at $3 for the next month. And the income was much smaller. So I returned it back to $2. That’s how I picked the right price for my first app.

I used the same approach to picking the price for my other apps ever since. I always start small and then increase the price by $1 every month. You need to wait for at least a month to gather enough statistics before changing the price.

One more thing. When I release a paid app I always release it as free first. I keep it free for several days and only after that I put a price on it. The reason for this is that I think there is a high probability that large amount of downloads at the beginning will improve the App Store ratings for the app later on. I always notice that right after release or an update of an app it is actively downloaded for several days and then the number of downloads decreases abruptly and stays low after that. I think that at the beginning the App Store shows your app to some large number of people and rates your app based on their behaviour. The more people from that first sample audience downloaded your app the higher the rating it is going to get. It is just a theory but it looks logical and it explains what I see in the stats of my apps.

I have a free app called Stream Journal. It is downloaded about 5 times a day. I put a button ‘Info’ into it that opens my site in Safari. According to the analytics of my site about 100% of people who downloaded my app visit my site. There they can see my other apps. I don’t know how many of them buy my paid apps. But I think it’s nice to have an audience of hundreds and thousands of people. Later on I’ll be able to promote my paid apps inside my free apps. I’ll be able to use Push Notifications to talk to my audience which is about 2000 people at the time of this writing.

Have a good design

A good design is important. So it is worth it to at least try to make your app look nice. Learning a little bit of Photoshop won’t hurt you, even if you don’t plan to become a designer. But sometimes you don’t even need Photoshop to make your app look a little better. Basically you just need to care about the looks of you app and make at least some effort. When I created my first couple of apps I didn’t think about good design at all. Then when I finally decided to do something about the ugliness of my apps my sales doubled. Take a look at this picture: 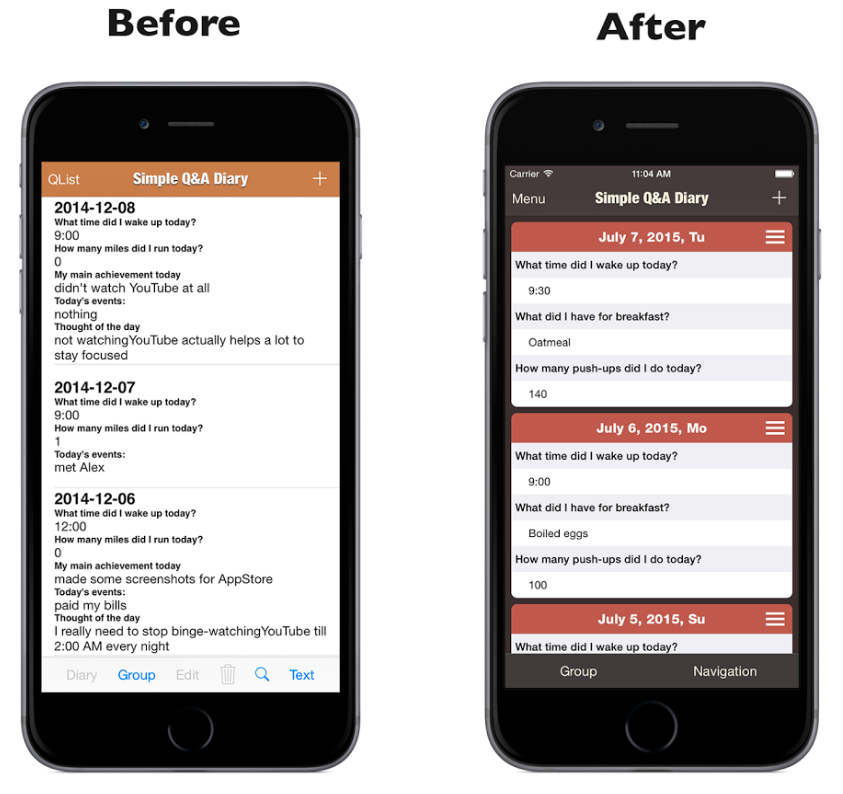 And I didn’t even use Photoshop a lot. Most of the work was done in the Xcode’s Storyboard. The result doesn’t look great, but it looks much better than what was before. That’s the point. If you want your apps to sell, make sure that they at least don’t look like shit.

So, that’s about it. Now you know how I make money on App Store.