Since about a week ago I started working from home. I used to work on a powerful iMac at the office but now the only computer that I use for iOS development is my MacBook Air 13” (early 2014). I also have a monitor and a wireless keyboard. My setup looks something like this. 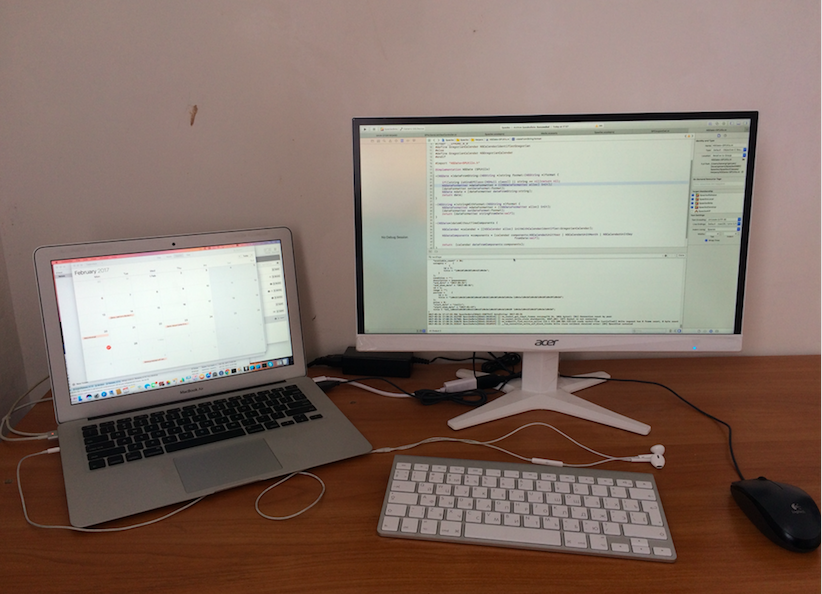 Everything is well and good, my laptop is powerful enough for my programming work. There is only one thing I don’t like about it: its HD is only 120 Gb so it runs out of memory all the time. Or, used to run out of memory until I figured out how to free a lot disk space.

First of all I installed a program called Disk Inventory X, which allowed me to analyse my disk space usage. Then I found out that the most memory consuming thing on my computer was this folder

It weighs many gigabytes (it weighed tens of gigabytes when I first found it) and they say that it is perfectly safe to delete everything from this folder. Now whenever I feel like I don’t have enough space I clean this folder.

There is also one other folder that rapidly eats up the disk space.

Every time you build an archive in Xcode it ends up in this folder. The archives for some of the apps I work on take more than 100 Mb. Some days I can make quite a few of these archives. Now I remove the older archives from time to time. Just recently I freed 10 Gb on my computer this way.

By the way, the whole purpose of this post is to remind myself of the location of these folders, so I don’t have to look for it in the future.

Another thing I did: I bought a 1 Tb external hard drive. I use it for storing my photos, movies and backing up my documents. I don’t store any photos on my MacBook any more and I even switched off iCloud sync so that the photos I take on my iPhone don’t automatically end up on my computer. I just move my photos from my iPhone to the external drive manually from time to time.